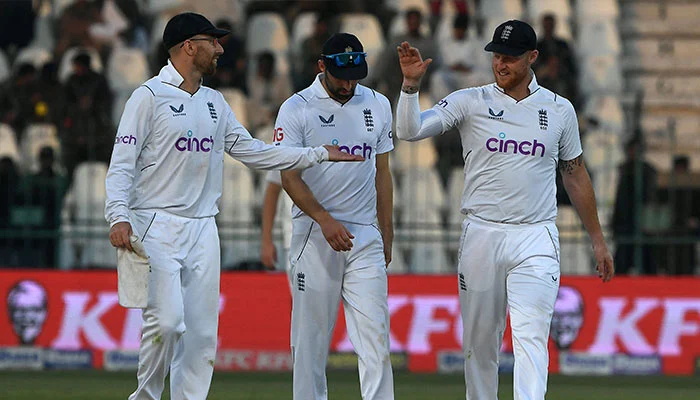 England captain Ben Stokes (R) celebrates with teammate Jack Leach (L) at the end of the third day of the second cricket Test match between Pakistan and England at the Multan Cricket Stadium in Multan on December 11, 2022. — AFP

England won on Monday the second Test against Pakistan in Multan, killing the hosts’ hope to win the three-match Test series.

The visitors took an unassailable 2-0 lead in the three-match series, as Pakistan were all out for 328, while chasing 355 for victory in the second session on day four of the contest.

Saud Shakeel topscored for Pakistan with a valiant 94, while Imam-ul-Haq made 60.

Mark Wood was pick of the England bowlers, claiming 4-65 as England registered their first series win in Pakistan since 2000-01.

England will conclude their first test tour of Pakistan since 2005 with the third and final match beginning in Karachi on Saturday.

Set a challenging 355 runs for victory, Pakistan ended the third day at 198-4, needing another 157 with two full days remaining.

With reverse swing helping the fast bowlers, England derailed Pakistan’s start of 66 without loss with three wickets for just 17 runs.

But Haq (60) and Shakeel (54 not out) led a remarkable 156-minute fightback during their stand of 108 for the fourth wicket before Jack Leach had the former caught at slip three overs before stumps.

Haq, who came in at number five instead of opening the innings following hamstring treatment, hit seven boundaries.

Allrounder Faheem Ashraf, promoted to number six, was three not out as Pakistan chased a series-levelling win after losing the first of three Tests by 74 runs in Rawalpindi.

Earlier, spinner Abrar Ahmed took 11 wickets Againts England for 234 across the two innings — the second best by a bowler on debut for Pakistan, behind Mohammad Zahid’s 11-130 against New Zealand in Rawalpindi 26 years ago.